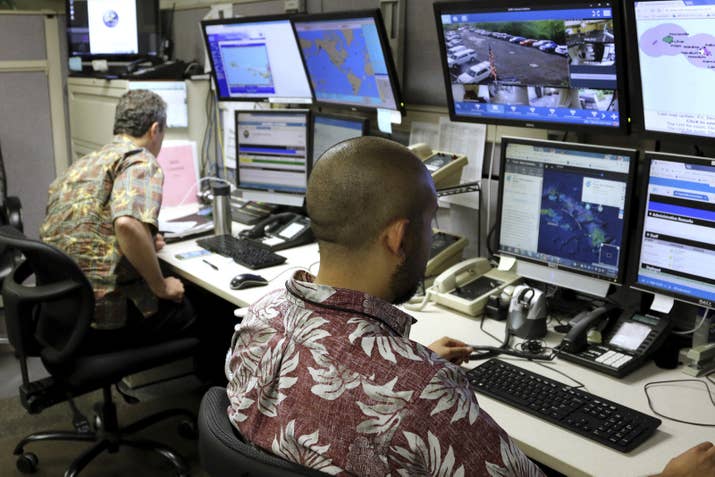 The employee who sent the false missile alert in Hawaii, causing widespread panic and confusion, is refusing to cooperate with the investigation, a federal official said Thursday.

Lisa Fowlkes, public safety bureau chief for Federal Communications Commission (FCC), told senators in a hearing that she was generally pleased with the cooperation from officials in Hawaii, but that “one key employee, the person who transmitted the false alert, is refusing to cooperate.”

“We hope that person will reconsider,” she said.

Richard Rapoza, a spokesman for the Hawaii Emergency Management Agency, where the employee works, told BuzzFeed News that he wasn’t sure why there was a lack of cooperation with the FCC, since he was not privy to their communications.

“With regard to our own investigations, he has taken the position that he provided a written statement shortly after the incident, and doesn’t need to speak to investigators because he has nothing to add,” Rapoza said.

The alert, which stated “BALLISTIC MISSILE THREAT INBOUND TO HAWAII. SEEK IMMEDIATE SHELTER. THIS IS NOT A DRILL,” was pushed to phones on the morning of Jan. 13, sending residents and visitors scrambling to find shelter. They left shaken and confused when they were notified after 38 minutes that it was a false alarm.

The incorrect alert was sent as part of a drill by the state’s Emergency Management Agency, which is responsible for alerts and is a part of the state’s Department of Defense.

Last year, Hawaii became the first state to enable push alerts for inbound missile warnings, which are part of preparedness plans made in case of an attack from North Korea.

In the initial aftermath of the alert, Hawaii Gov. David Ige said the alert was sent after an emergency management official accidentally pushed a wrong button.

“It was a procedure that occurs at the change of shift where they go through to make sure that the system is working, and an employee pushed the wrong button,” Ige said. 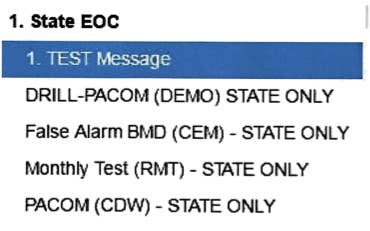 A facsimile of what the operator saw at work was released by Hawaii’s Emergency Management Agency, showing that the employee used a button on a drop-down menu with about five options to accidentally send the message. The employee clicked a link titled “PACOM (CDW),” instead of the correct “DRILL-PACOM (DEMO).”

He also had to confirm his choice before sending it, according to agency officials.

While the investigation is underway, the employee was reassigned within Hawaii’s emergency operations center and does not have access to the warning system, Rapoza told BuzzFeed News after the incident.

But Clairmont also suggested that the incident could be more than just a case of someone pressing the wrong button, telling the Star-Advertiser that “it’s not as easy saying it was one person doing this.”

A total of four people were on duty that Saturday morning, he said, and the employee who sent the alert is both a 10-year veteran of the agency and “very well-trained and seasoned.”

After the false alert was sent, the agency started requiring that two people sign off on sending the alerts. It also created a correction draft to immediately send to phones if someone sends a false alert again, since one of the reasons cited for taking 38 minutes to send the correction was that there was no prepared message.

In the case of a real missile attack, the US Pacific Command would notify Hawaii officials, who would activate the warning system.

The alert is sent over the Wireless Emergency Alert, a federal system designed to send messages to people based on geographic location. The system can be used by federal and state agencies to alert people of weather events and law enforcement notifications.

Sen. Brian Schatz, a Democrat from Hawaii, said during the hearing he is also introducing legislation to make it clear that the authority to send missile alerts are the responsibility of the federal government, which would still work with state and local emergency management agencies.

Salvatore Anello, the man who pleaded guilty last year in connection with his 1-year-old granddaughter’s fatal fall from a cruise ship, has been sentenced to three years of probation, Puerto Rican authorities...

A fight that erupted over snow shoveling allegedly led to a Pennsylvania man shooting two of his neighbors to death, authorities said. The fatal gun violence occurred in Plains Township, about 15 miles southwest of...

A British woman is set to spend several months in jail after pretending to be diagnosed with cancer to collect enough money to throw her dream wedding ceremony, fooling not only her close friends but also her now...